The NFL takes its eco-initiatives to the next level 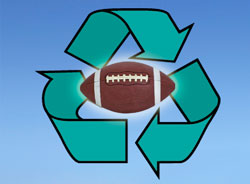 There could hardly be a better state to host a "green" Superbowl than Arizona, which needs to call attention to the very immediate realities of pollution and resource depletion and the importance of fast environmental action.

People are moving to the hot, dry state in droves—population there increased by over 800,000 people between 2000 and 2005 according to U.S. Census figures, more than the number of people that live in South Dakota or Vermont or Wyoming. By 2030, Arizona’s population is expected to double to close to 11 million people, the same time that water supplies will likely fail to meet demand. Not surprisingly, the state’s greenhouse gas emissions have risen at an alarming rate, putting the state among the top 10 for carbon dioxide emissions. In Arizona’s case, cars and coal-fired power plants are to blame. As those emissions send temperatures rising in summer months, the state faces increased droughts and water shortages.

This year"s Superbowl will be the second time the NFL has committed to going carbon neutral.

Phoenix, where the February 3 Superbowl XLII clash between the New York Giants and the New England Patriots will be held at the state-of-the-art University of Phoenix stadium, is one of the fastest-growing cities in the country. While people gripe that the National Football League’s greatest match-up will never feature snow due to the league’s conditions that it be held in a dome or warm climate, perhaps the Superbowl’s warm weather contest can serve as another sort of lesson. If climate change continues unchecked, even Green Bay, Wisconsin, the Packers" home city, will be able to host a Superbowl down the road.

Yes, that NFC championship game between the Giants and the Packers on January 20 was beer-freezing, finger-numbing cold, one degree below zero with a wind chill of 23 below, the third-coldest playoff game in history according to FOX Sports. But the Wisconsin Environment and Research Center released a report last year detailing the extensive threats coming to the state from increased temperatures, which have risen by .7 degrees Fahrenheit during the 20th century. Water levels at Lake Michigan have dropped four feet, several tree species are under threat, forest fires and pest infestation are on the rise, loss of snow and ice prevent winter recreation like ice-fishing and snowmobiling, and Wisconsin dairy farmers lose some $60 million a year from heat stress to cattle.

For many fans, football without the possibility of another "Ice Bowl" (the celebrated 1967 championship game where the Packers beat the Dallas Cowboys 21 to 17 in -13 degree weather, with a -36 degree wind chill) is not football as it’s meant to be played. Football is about roughing it. Football is supposed to hurt. 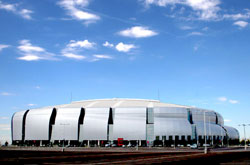 NFL rules say the Superbowl must be held in a dome or warm climate and the University of Phoenix stadium fits the bill.

When put in this context, nothing could be more defensive of the sport of football as it’s "meant to be played" than powering the Superbowl with 100 percent renewable energy. The NFL made that commitment last year, and they’re doing it again this year, with a little more media fanfare. Metro Phoenix’s largest power producer, Salt River Project, is supplying SRP EarthWise Energy renewable energy certificates to offset the Super Bowl (and its associated "NFL Experience" activities) with wind and solar power. Some Phoenix hotels will be offsetting their emissions in honor of the occasion, too. The NFL is also planting thousands of trees, enough to reforest more than 42 acres that were destroyed by in the 2002 Rodeo Chediski fire, the worst in Arizona’s history, in which over 400,000 acres were lost in the blaze.

According to Forbes, the Superbowl has incorporated some green elements for the past 14 years, including recycling initiatives and donation of uneaten food to local food banks. But carbon offsetting is a sign that the NFL is moving green operations beyond the positive public relations level. The more explicit the league makes that message, the more impact the NFL and other sports franchises can have among the fans who worship at their altars. Consider this: Superbowl Sunday is an unofficial national holiday in the U.S.—the most-watched event on television and the second-largest food-consumption day after Thanksgiving. 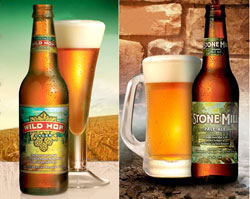 Even the maker of Bud, Anheuser-Busch, has a line of organic beer.

Even the maker of Budweiser, Anheuser-Busch, the event’s largest advertiser, now produces two varieties of organic beer (Wild Hop lager and Stone Mill pale ale). It’s not completely far-fetched to imagine a new Superbowl party taking shape: one where local food is on the menu, organic chips in the bowls and the beer cans end up in a recycling bin. Would it be a radical departure from sports watching as we know it? Not so much. But when the NFL has declared going green to be an essential football philosophy, anything seems possible.