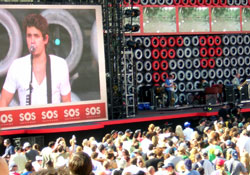 John Mayer, whose tour bus runs on biodiesel, sang his eco-appropriate "Waiting on the World to Change."© Shawn Query

On July 7, an estimated two billion people either attended or watched—on all seven continents—the simultaneous concert event known as Live Earth, brainchild of former Vice President Al Gore. The event combined the efforts of artists from many different genres, from the rap stylings of Kanye West to the newly reunited Police in an effort to "Save Our Selves" from global climate change. Live Earth probably inspired many concertgoers and viewers at home to make individual lifestyle changes to slow global warming. But the operations of the New Jersey concert I attended were unbelievably wasteful and retroactive to the day’s overall message, and the focus on saving the human race as opposed to saving important ecosystems and animal species missed the mark completely in my opinion.

Upon arriving at Giants Stadium Saturday afternoon, hordes of music fans shuffled into the grandstands, ready for the eight-hour lineup of artists such as AFI, Ludacris and the Dave Matthews Band. There was a lot to cheer about. All electricity from the event came from utility-supplied renewable energy or was offset by purchasing renewable energy credits. The light shows used high-efficiency light-emitting diodes (LEDs), and waste receptacles near concession stands had bins for recyclables, other waste and even compostable materials. The concert made many efforts to be as sustainable as possible, encouraging concessions to serve food and beverages with biodegradable packaging and providing additional public transport for attendees. Each artist’s air travel or drive was also offset by carbon credits, according to The Concerts for A Climate in Crisis.

Most artists chose songs according to the theme of the day. Alicia Keys sang Marvin Gaye’s "Mercy Mercy Me (The Ecology)," and John Mayer, whose tour bus runs on biodiesel, sang his year-old hit "Waiting on the World to Change." But other artists came ready to entertain without environmental undertones. Jersey favorite Bon Jovi played nostalgic crowd-pleasers like "Living on a Prayer" and "Dead or Alive," and Kanye West sprinted across the stage while rapping to a mash-up of his latest hits.

In between sets, such celebrities as Leonardo DiCaprio and Cameron Diaz interjected inspirational speeches to "answer the call." Public service announcements on the stage’s large screen featured celebrities demonstrating ways to cut down energy use. Will Farrell showed us how to screw in a compact florescent light bulb while Chris Rock told us keeping our car tires properly pressurized could save us a tank of gas each year. Primate researcher Dr. Jane Goodall greeted the audience with a chimpanzee call and voiced her hope that people will take a stand against global warming for the sake of future generations. 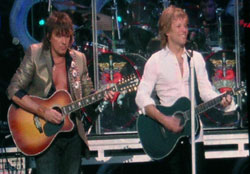 Jersey favorite Bon Jovi stuck to crowd-pleasers like "Living on a Prayer" and "Dead or Alive."© Shawn Query

The collaboration of the musicians and influential celebrities around the world conjured thoughts of an impending green revolution. Maybe, as Gore had hoped, this event would be a wake-up call for people around the world to change, and maybe it would even influence our federal government to commit to an international greenhouse gas treaty. Adding to the proactive tips given by intermittent celebrity PSAs, Gore introduced his seven-point pledge for people making a commitment to reduce climate change. Those who make the pledge will:

1) Demand that their country join an international treaty within the next two years that cuts global warming pollution by 90 percent in developed countries and by more than half worldwide in time for the next generation to inherit a healthy earth.

2) Take personal action to help solve the climate crises by reducing their own carbon dioxide (CO2) pollution as much as they can and offsetting the rest to become "carbon neutral."

3) Fight for a moratorium on the construction of any new generating facility that burns coal without the capacity to safely trap and store the CO2.

4) Work for a dramatic increase in the energy efficiency of their home, workplace, school, place of worship and means of transportation.

5) Fight for laws and policies that expand the use of renewable energy sources and reduce dependence on oil and coal.

6) Plant new trees and to join with others in preserving and protecting forests.

7) Buy from businesses and support leaders who share their commitment to solving the climate crises and building a sustainable, just and prosperous world for the 21st century.

Al Gore"s seven-point pledge was a good start, but Live Earth could have asked for more.© Shawn Query

This is the type of initiative we need from individual environmentalists everywhere, and if enough people participate, a groundswell will be created around the world and tough legislation will be enacted. For that, Gore should be commended. The concert itself, however, certainly could have been more sustainable.

All beverages at the stadium were served in plastic bottles or cups, and some drinks sold outside the stadium was in aluminum cans. Glass, though it may pose a safety hazard in a concert setting, is much more easily recycled. The idea to have compost bins was excellent, but stadium guests needed instruction, a sign or an announcement, on how to separate compostable items from other waste. No such information was available, so most compost-friendly waste ended up in a garbage bin headed for a landfill.

Green confetti erupted on stage during a few performers" sets. Let’s hope the sparkly explosions were made from recycled materials, because it seemed that most of it went into regular garbage bins after the concert was over. Providing and encouraging use of public transportation for attendees was also a plus. But a dozen or more diesel buses sat idle at the stadium for an hour and a half, spewing noxious greenhouse gas fumes into the air as drivers waited for exiting traffic to subside. Were these emissions taken into account for this "carbon neutral" event? If there is another Live Earth next year, these and other aspects of concert operations can and should be improved.

The Police, joined by Mayer and West, performed the last song of the evening, a rendition of "Message in a Bottle." On the stage in LED lights bordered by old tires, the letters flashed: "S.O.S.," which for the concert at least stood for "Save Our Selves." This message—that we’re only trying to stop global warming to ensure the survival of the human race—just seems selfish.

Scientists have warned for years that the disappearance of species is a result of climate change and is an indicator that entire ecosystems may collapse. Studies indicate that one-quarter of the world’s species may become extinct by 2050 as a result of global warming. Species under threat include the insects that pollinate the fruit and vegetables we eat, the trees we build our houses from, the tropical plants that may one day lead to cures for human disease. And they are dwindling at an unprecedented rate. Live Earth was a global event that brought attention to a serious global problem. But maybe next year, instead of saving ourselves, we should focus more on saving the Earth and all its inhabitants.

SHAWN QUERY is an intern at E.