Birds, Bush and Habitat Battles: An Interview with David Wilcove 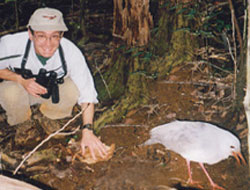 David Wilcove is a professor of Ecology and Evolutionary Biology at Princeton University, as well as the director of the Program in Environmental Studies and a professor in the Woodrow Wilson School of Public Affairs. He has worked for the Wilderness Society, The Nature Conservancy and Environmental Defense, and has served on the board of directors of the RARE Center for Tropical Conservation, the Society for Conservation Biology, the American Bird Conservatory, and on the editorial boards of Conservation Biology and Ecological Applications. Wilcove is the author of two books: The Condor’s Shadow: The Loss and Recovery of Wildlife in America (1999) and No Way Home: The Decline of the World’s Great Animal Migrations (2007). He developed his fascination with birds while growing up in Buffalo, New York, and one of his favorite ecosystems is southeastern Arizona near the Chiricahua mountains. Below, Wilcove answers questions related to his work to conserve the native scrub ecosystem in Florida, and to save the northern spotted owl and old-growth forest habitat in the Pacific Northwest.

Justine Hausheer: I have read that you are currently assessing efforts in Florida to help preserve the native scrub ecosystem. Where in the state have you been working?
David Wilcove: Our base of operations was the Archbold Biological Station, near Lake Placid. Our work focused on a specific ecosystem, 100 miles long by 10 miles wide, running from south of Orlando to just north of Lake Okeechobee.

JH: What flora and fauna are you researching specifically?
DW: We are looking at the ecosystem as a whole. This strip has the highest density of endangered in species anywhere in United States outside of Hawaii. We have been determining how successful conservation measures thus far have been.

JH: How much danger is this ecosystem in, and what factors are endangering it?
DW: About 85 percent of the habitat type that makes up this strip is already lost to urban sprawl and citrus production, so only 15 percent remains.

JH: What is the state of current conservation efforts?
DW: Given the small ecosystem size, and given how much of the habitat has already been destroyed, there is really no way to protect enough habitat to be able to walk away satisfied that the species there will prosper. There is just not enough habitat left to ensure healthy populations of those species. 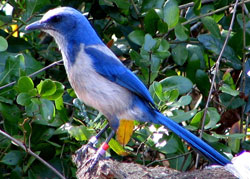 JH: What agencies are working to conserve the scrub?
DW: The project was funded by the Florida Fish & Wildlife Conservation Commission, and by the United States Fish & Wildlife Service.

JH: Who owns most of the land you are working to conserve?
DW: The biggest landowner is the state, followed by private owners. About twenty thousand hectares is protected, of which the state owns ten thousand. Some of the major private owners are the Nature Conservancy and the Fish & Wildlife Service.

JH: You previously worked on the protection of the Northern Spotted Owl and its old-growth forest habitat in the Pacific Northwest. How successful was your work with both owl species and forest?
DW: I was working for Wilderness Society, and they had made it their top priority to preserve as much of the old-growth forest as possible. My role was to look at the issue from a scientific perspective and to determine as best I could how much forest would be needed to sustain the northern spotted owl species. More generally, I also looked at how much forest we might wish to protect for the other species associated with the old-growth ecosystem.

JH: I understand that the existing forests in this region are extremely fragmented. How protected are the remaining fragments? Is there a difference between protection on paper versus reality?
DW: [The fragments] are protected by virtue of the forest plans developed during the Clinton administration. They are not protected by any form of government statute; their main protection comes from two things: the Endangered Species Act as it applies to the spotted owl, and the management plans for the individual national forests that were developed under the Clinton Administration. These plans could be undone, Bush tried to without great success.

The battle was intense in the late "80s and early "90s, but by now the mills that needed old growth logs have shut down, and the people who were going to be laid off have already been laid off or are now retrained. Now, there is not as much demand for old growth wood as there used to be, because the social and physical infrastructure is no longer there. The Bush administration faces the question of how far they want to stir up the old hornet’s net. Regardless, it would be difficult to get around the Endangered Species Act, and it would always be preferable to have statutory protection. 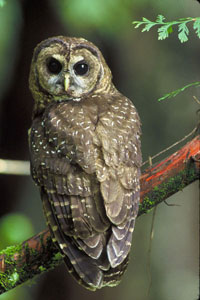 The Endangered Species Act is the first line of defense in protecting habitat for the Northern Spotted Owl and other species.

JH: What are the greatest threats to old-growth forests besides logging?
DW: If we started by looking on the western side of the Cascades, it would be the attrition due to wind and storms, because the forests are fragmented and exposed on the edges from clear-cutting. In the eastern Cascades, where it is dryer, fire suppression and threat of catastrophic fire due to that suppression is the biggest threat.

JH: Who owns the largest tracts of forest, and who owns the greatest percentage of forest?
DW: All are [within] National Forests, with some in Bureau of Land Management. But all are federally owned.

JH: Has the situation changed since your project ended?
DW: I switched jobs in 1991, but the issue was lively until 1994, after Clinton finalized plans for the northwestern forests. Since then, it has subsequently diminished in intensity.

JH: What is your personal and professional opinion about the ability of the old-growth forest ecosystem to survive in fragments around the Pacific northwest?
DW: I sense that if we protect the largest blocks of forest, and if we commit to allowing the areas that have been recently clear-cut to continue to develop into mature forests, we have a reasonable chance of retaining the species and ecosystem properties that those forests offer.

JUSTINE HAUSHEER is a student at Princeton University.