The taint of Nicholas Ceausecu’s dictatorship still lingers over Romania like a stubborn odor. The present is not much better: 44 percent of the population lives below the poverty line. Corruption is taken for granted in Romania, but there are some hopeful signs, including new grassroots activism. In the small town of Sighisoara, for instance, a citizens group defeated the government’s plans to build a Dracula theme park.

Last year, the Minister of Tourism, Dan Matei Agaton, unveiled his grand design for an American-style theme park based on Transylvania’s most famous personality, Count Dracula. Unfortunately, Agaton’s park would have been built in the last inhabited walled citadel in Europe, a place so special that it is listed as a UNESCO world heritage site. The plan also included delisting 120 acres of old-growth forest that had been recognized as a wildlife preserve. 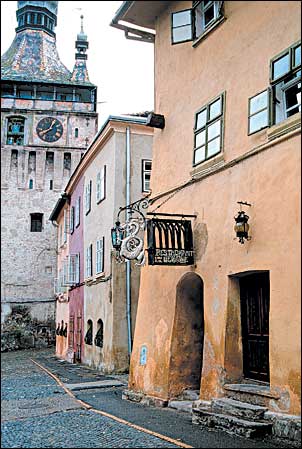 This building in picturesque Sighisoara is the presumed birthplace of Vlad the Impaler.
Ron Rocz

Agaton’s design for a Disneyesque adventure playground included a 700-room hotel, roller coasters, a golf course and ubiquitous fast-food restaurants selling "blood pudding" and "dish of brains."Agaton claimed to have Greenpeace approval for this audacious plan, which prompted a lawsuit from a not-amused Greenpeace International.

Unfortunately for Agaton, the citizens proved non-compliant. Sustainable Sighisoara was formed in 2001, and its members have since been harassed, subjected to anonymous phone calls, have had their children threatened and find themselves named on a report entitled "Enemies of Tourism."

Detractors pointed out that, aside from the colossal amounts of money that would have been required to build the park, a web of new road systems and vastly improved public transport would be needed to handle the suggested influx of 30,000 tourists per day.

The historical inaccuracy of the common Dracula legend also had critics riled. The 15th century Vlad Tepes, also known as "Vlad the Impaler," was born in Sighisoara, but bears little relation to the fictional Dracula created by Bram Stoker. Tepes impaled his victims on stakes and, after battles, enjoyed dining amongst the corpses of his enemies.

"What seems clear to me," suggested Sustainable Sighisoara member Alexandru Gota, "is that many high-ranking people have financial stakes in this project." Major cash contributions have come from SIF Oltania, a publicly owned company set up to manage the former state industries.

Romania has a history of ecological disasters. The Black Sea is one of the world’s most polluted waterways. Two years ago, a dam at the Aurul goldmine gave way, releasing more than 20,000 tons of highly toxic cyanide waste into the Somes and Tisa rivers. The Dracula park must win approval for its Environmental Impact Assessment if it is to be built, and Agaton prepared a minimal seven-page document. But Romania is notorious for the laxity with which it conducts these assessments.

At presstime, the promoters bowed to what was probably unaccustomed public pressure and announced that the theme park will not be built in Sighisoara, but in an as-yet unnamed location in Romania. Defeating it there may be up to a new group of activists.