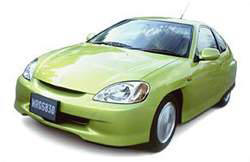 As if people need another reason to switch over to hybrid gasoline-electric automobiles, Travelers, the country’s fourth largest property and casualty insurer, will begin next month offering its customers who drive hybrids a 10 percent discount on their auto insurance.

In announcing the new discount, Travelers executive Greg Toczydlowski told reporters that since hybrid drivers generally stay within speed limits on daily commutes between home and work, they represent a lower risk to the insurer. Toczydlowski added that an analysis of the company’s customer base yielded the findings that hybrid owners—split down the middle by gender, typically married, and aged 41 to 60—are a pretty safe lot.

Of course, with hybrid sales doubling every year since their introduction and with 30 different models currently available from dealers, catering to such a customer base is smart business. “Industry experts predict that hybrids could make up nearly 15 percent of total registered vehicles within the next decade,” Toczydlowski said.

Also, since insurance companies fear the potentially disastrous effects of global warming on the environment and on their bottom lines as such, they encourage the use of hybrids, which generate significantly less carbon dioxide—the chief greenhouse gas linked to global warming—than traditional cars. Given the benefits, analysts expect other auto insurers to follow Travelers’ lead.