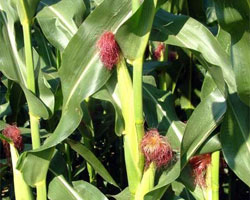 Genetically modified foods—including corn, soy and sweeteners used in everything from chips to soft drinks—are widely available, and not subject to special labeling. In part, that’s because the U.S. Food and Drug Administration has assured the public that such crops are safe—“nutritionally equivalent” to their non-modified counterparts. But a new study from Canada finds that certain insecticides which are built inside these crops persist in the human bloodstream—including the bloodstreams of pregnant women and newborns—where the toxins may present human health problems.

Take Bt-corn—a type of genetically modified (GM) corn that turns up in much of the processed food we eat, from tortilla chips to the breading on chicken nuggets. Bt-corn contains a gene from a soil bacterium called Bacillus thuringiensis, which, in turn, produces a protein (Bt delta endotoxin) that kills the larvae of the European corn borer. Instead of having to spray fields with pesticides to get rid of the borers, farmers grow the GM corn crops instead with the pesticide built in.

It was thought that the built-in toxins passed through the human body, making GM foods safe to eat. But the study published last month in the peer-reviewed journal Reproductive Toxicology looked at the blood of 30 pregnant and 39 non-pregnant women and found that the toxins did indeed persist in their bloodstreams—and in the bloodstreams of their fetuses. One of several Bt toxins—the Cry1Ab protein—for example, was detected in pregnant women, their fetuses and non-pregnant women alike. It is the first study to show that pesticides associated with genetically modified foods continue to circulate in women’s bloodstreams, “paving the way for a new field in reproductive toxicology including nutrition and utero-placental toxicities.”

Many groups have warned against the dangers of GM crops and fought for the labeling of genetically modified foods, such as the nonprofit GM Watch and the Organic Consumers Association which operates the Millions Against Monsanto campaign. Monsanto is the multinational corporation that makes both the herbicide Roundup and the herbicide-resistant, patent-protected, genetically modified “Roundup Ready” seeds to withstand the spraying of Roundup. The findings relating the potential harm to human health from GM crops are but the latest in a long list of problems watchdog groups have found with Monsanto—a company that’s also accused of bankrupting small farmers and polluting rural communities.