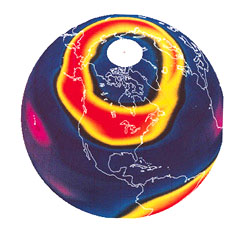 Climate change is becoming a major concern among leading American financial institutions and corporations, and they are starting to develop strategic responses, according to a report issued this week by the Carbon Disclosure Project (CDP), a coalition of global investors with more than $31.5 trillion in assets.

Financial institutions are also taking action on climate change, according to the report. AIG, Allianz and Goldman Sachs have released dedicated climate change policies in the past 12 months. In addition, Citigroup, JP Morgan Chase, Merrill Lynch and Morgan Stanley have published equity research reports analyzing the financial performance of the carbon markets.

Worldwide, awareness of climate change issues is growing, but action to reduce emissions is happening at a slower pace, the report shows. Of the 2,000 companies surveyed, including the world’s 500 largest publicly owned companies (FT500), 87 percent indicated that climate change represented "commercial risks and/or opportunities to their business." But less than half (48 percent) of those companies have implemented a greenhouse gas reduction program, according to the report.

"The findings of CDP4 confirm that awareness of the risks and opportunities posed by climate change has risen dramatically among investors and the companies they own. But awareness alone will not drive changes in investment and corporate strategy," says James Cameron, CDP chairman.