Solar Shingles Can Turn Your Rooftop into a Miniature Power Plant

All of the energy we use originally came from the sun, even fossil fuels like coal and oil. Burning that fuel, which stored the sun's energy millions of years ago, releases all of that ancient “solar” power.

Unfortunately, it releases a lot of pollution, too.

For years, solar technology has been a promising but expensive alternative. Now, a new federal program may finally get solar off the ground—and onto the roof. President Clinton's Million Solar Roofs Initiative, created in 1997, aims to cover a million American rooftops with solar systems by 2010. In most cases, the federal government does not provide direct financial support for installation. But at least it's spending its money close to home: 20,000 of Uncle Sam's rooftops will be retrofitted with solar shingles within the next decade. The roof of the Pentagon—the largest office building in the world—has already been solarized.

Solar shingles, made up of silicon-based photovoltaic cells (PVs) , transform radiation from the sun directly into electricity. Thermal solar systems work differently—using the sun's heat instead of its light rays. And unlike traditional solar panels, which attach to the roof, PV shingles are the roof. The shingles convert the sun's energy into a DC electric current, which is then directed to the building's circuits with the help of an inverter box. A 300- to 400-square-foot block of shingles can provide 60 to 90 percent of the annual power needs of a typical three-bedroom home, depending on how much sun it gets. (The rest of the household's power comes from the utility company.)

The First on Your Block

“The benefits are enormous,” says Sam Salamay, of Building Energy Systems and Technology of New York, which sells Atlantis Energy's Sunslates. Glass-laminated solar shingles, he says, can last twice as long as traditional roofing, and can be installed by local contractors. Angela Palmieri-Burton of United Solar Systems in Michigan, which installed the Pentagon's sun-loving roof, adds that a solar shingle system will work in just about any locale (although systems in sunnier places will, of course, yield more energy) . And since the sun is the power generator, the energy is inexhaustible—unlike that from fossil fuels. The Union of Concerned Scientists points out that the energy from just a month's worth of sunshine surpasses the amount of energy stored in all of the Earth's reserves of coal, oil, and natural gas. And according to the Natural Resources Defense Council, using clean energy sources like solar shingles could cut the nation's energy consumption by 45 percent within the next 30 years. In the most energy-hungry country in the world, that could make a big difference. 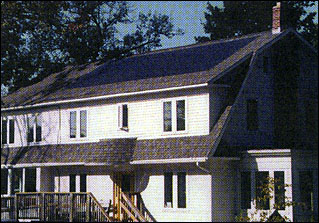 But one dark cloud will have to be cleared before we all have our own rooftop power plants. “We have to cut the cost,” admits Dan Adamson, deputy assistant secretary at the Department of Energy's Office of Power Technology. Despite the long-term cost savings, solar shingles are still too expensive for most people to afford. PV costs about 20 cents per kilowatt hour, about twice as much as conventional energy.

Terence Parker, manager of sales engineering at United Solar Systems, estimates the installation and startup cost of a two-kilowatt system adequate for a small family's needs (including the solar array itself, an inverter to change DC power to household AC, a battery pack, and a charge controller to maintain the pack) at $35,000. Salamay's Atlantis Energy system is much cheaper, at $12,000 for a two-kilowatt system. Buyers of either brand can choose from a stand-alone unit that depends on batteries to store excess energy, or a more-expensive grid interactive system tied in to the local utility.

Keeping the Taxman Away

Tax incentives and competition within the newly deregulated electric industry could help reduce costs. California sweetens the pot by offering “buy-down” programs that give consumers rebates for installing alternative energy systems, and can cut costs by as much as a third. (It's not surprising that hundreds of solar roofs have been installed in California, far more than in any other state.) Net metering, which requires electric companies to buy excess power from solar-powered homes, also can cut costs. Sam Atwood, of the South California Air Quality Management District, says that when the system produces more energy than the house requires, “The meter literally will spin backwards.” So far, 26 states have net metering laws.

Solar shingles will not become as common as cellular phones overnight. But Adamson is optimistic about the technology's future: “When my kids buy a house in 20 years, chances are it will have a solar roof on it.”

APRIL REESE is an intern at E Magazine and a graduate student at the Yale University School of Forestry and Environmental Studies.