Not long after the Californian power outages of 2000 to 2001, computer manufacturers Compaq and Hewlett Packard (HP) merged into one company. The on-again, off-again energy supply must have been an unwelcome problem for the two companies, which at the time wanted to guarantee complete business continuity. The companies" histories of careful energy policies did not entirely shield them from the crisis, but helped them manage it. 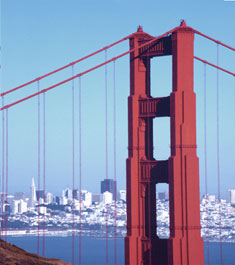 California has managed stable per capita energy use over 30 years, accompanied by a 40 percent growth in its economy.© Getty Images

Before the merger, both had cultivated energy-conscious environments, culminating in a 16 percent cut in energy consumption in 2001 at Compaq’s facilities. Most notably, Compaq doubled the manufacturing space and occupancy at its Fremont plant without raising energy use. HP says it saves $2 million each year through a raft of measures including the installation of new energy-efficient chillers and changes to lighting.

These companies" reforms are not unusual, and have been part of a bigger movement in California driven not only by the supply crisis but also by a relatively environmentally friendly culture and the energy thirst of some of its high-tech industries. There is recognition that decoupling power use from market growth is possible, lowers risk and cuts costs. As a result, this forward-thinking state has built up a portfolio of skills and techniques that have generated a globally unique statistic: stable per capita energy use over 30 years, accompanied by a 40 percent growth in its economy. (Unfortunately, however, California’s rapid population growth means that total state energy use keeps going up.)

A group of energy campaigners want to use California’s energy expertise to create a freely available U.S. export, with China as its first port of call. Booming but struggling, China is in the middle of its own energy drama and trying to regain control over escalating demand. Barbara Finamore, director of the China Program at the Natural Resources Defense Council (NRDC), explains: "When the government looked at the results of our audit, they couldn’t believe there was so much energy-efficiency potential available at such a low price. The Californian model is one the Chinese really want to emulate."

The NRDC’s unusual partnership with Chinese government officials and company managers over the last two years was not confined to the rapidly growing fleet of power stations, unlike previous Chinese programs. Instead, the consortium, working alongside the U.S.-based Institute for Market Transformation (IMT) and the China-U.S. Energy Efficiency Alliance, is creating an unprecedented $11 million demand-side management project centered in Jiangsu, a province in Eastern China, and is now spreading throughout the country.

The Renewable Energy and Energy Efficiency Partnership (REEEP) is supporting the newest phase of this initiative, which kicked off this summer with a Beijing forum attended by 300 people. Together, the agencies aim to cut into the heart of 1,000 manufacturers" energy use by 2010. Chinese computer and component manufacturers will no doubt eventually benefit from experiences of companies like HP, but the team will start with particularly energy-intensive chemical industries, metallurgical and cement manufacturers.

It is an extraordinary challenge, described by Cliff Majersik of the IMT as occurring "right at the frontline, where emissions are growing the fastest." The International Energy Agency’s outlook report, produced in November, confirms these views. Urging China to restrain its oil use, it upped its previous 2030 energy consumption predictions by two billion tons and said China’s oil demand would more than double to 16.5 million barrels a day by 2030. China’s energy use would play a major part in raising the planet’s total demand by 50 percent compared to today’s rates, it said.

It hasn’t always always been this way. Chinese leader Deng Xiaoping famously preceded his 1978 market growth program with the words "development is above all," but created a reasonably balanced process, doubling energy consumption between 1980 and 2000 while quadrupling the economy. Problems crept in after this period, however, as energy growth began to overtake economic growth rates. In the early years of this decade, China’s energy use per unit of gross domestic product (GDP) was four times the world average. 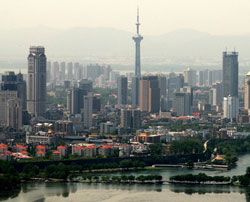 An million demand-side management project centered in Jiangsu, China, is spreading throughout the country.

Now the government has announced a dramatic goal: to cut energy intensity between 2006 and 2010 by 20 percent, or 4.36 percent each year—all the while quadrupling economic growth. It will be a daunting task, though not as daunting as it would be in a less controlled economy. Although there is considerable direct foreign investment into China, the government itself owns shares in many companies (though many others are state-owned). The government has announced rewards for companies that meet energy-efficiency targets, and China is now considering adding a surcharge to power rates with the aim of using new funds for energy savings activities.

The government’s 17th Party Congress, held in October, brought forth even more drastic measures: the closure of cement and steel works in major towns to cut energy use. Real data have shown, however, that despite its efforts, China missed its target in 2006 and has thus far reduced its energy intensity by only 1.3 percent. However, new estimates show that China has reduced its energy intensity by a more impressive three percent in the first three quarters of 2007, according to the NRDC.

Even more gains are necessary to meet the goal. One incentive, adopted in California, creates both rewards and penalties for utilities at the same time. If they exceed energy saving goals, they share a small part (up to an annual total of $150 million) of the net benefits the program provides to users. If they fail to reach targets, they are penalized by the same maximum amount. Effectively, the new initiative disconnects the profit motive from the electricity sales of utilities.

While this would be an excellent mechanism to use in China, it would probably be one of the trickiest, because China’s economic and political structure is so different from that of the U.S. "All utilities in China are government-owned and thus their profits will be part of government revenue," says Bo Shen, who is also working on the NRDC program. However, the possibility exists that the government could reduce the power station’s revenue commitment to the government, with the balance used to fund efficiency.

Other approaches are more immediately practical under current conditions. "Paying for efficiency incentives through utility revenues is the most sustainable option," says Barbara Finamore. A surcharge that cannot be passed further down the chain is added to the utility bill and paid by everyone, so that the base unit price increases, although total electricity bills usually go down. "The thinking behind this is that energy efficiency will help improve the environment and thus is treated as a public benefit that everyone will enjoy," says Bo Shen. Alternatively, a special surcharge is imposed on customers and used exclusively for energy efficiency. While this is possible in the U.S., a surcharge in China cannot be added without central government approval.

Another approach is to create a savings fund. The Chinese Ministry of Finance (MOF) has allocated $900 million for energy-efficiency support in 2007 alone, but this subsidy-based approach is be

ing replaced by an incentive-based one, in which financial rewards are linked to the level of savings made by a company.

"Industrial facilities have their own personal programs and targets, but they’re not succeeding because of structural problems in the system," says Finamore. "They don’t have enough qualified people to do audits and it costs them a lot, even though it saves even more. It’s hard for them to justify the expenditure. Our program wants to cut right through that." The NRDC program, which could last through to 2010, will also produce budgets, carry out energy audits, train local executives, provide information about new technologies, and advocate related policy changes.

Numerous market barriers are in the way, but Majersik is positive. "The Chinese officials recognize that it’s in their interest. They’re even paying to send their own delegates to U.S. forums. It’s an indication of their seriousness. And we’re serious, too, because our climate change fight rises or falls on whether we can make China more efficient."

DR. MARIANNE OSTERKORN is the International Director of the Renewable Energy and Energy-Efficiency Partnership.