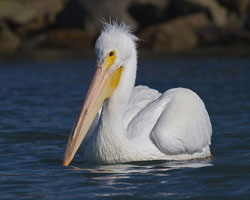 More than two years after the blowout on the Deepwater Horizon offshore oil rig killed 11 workers and spilled more than 4.9 million barrels of oil into the Gulf of Mexico, signs of the spill’s devastating impact continue to emerge.

Scientists in Minnesota have traced oily residues and chemicals found in pelicans’ eggs in the state back to the Gulf of Mexico, concluding that the substances were petroleum compounds and chemicals like dispersants that were used to clear the spill from the surface. Most of these white American pelicans spend their winters along the Gulf coast, and come north to Minnesota’s Marsh Island to hatch and raise chicks. Ninety percent of the pelican eggs for which test results are in carried petroleum compounds; nearly 80% contained chemical dispersants.

“Any contaminant that makes its way into the bird could be bad, but it could be especially bad if it gets into the egg because that’s where the developing embryo and chick starts,” Mark Clark, an ecologist at North Dakota State University who conducted the testing, told Minnesota Public Radio. “And when things go wrong at that stage there’s usually no recovery.”

Given these findings, Minnesota state officials are also concerned about other birds, such as loons. But it is among sea creatures—including many that people commonly eat—that the effects appear to be most dramatic. Not only have coral and dolphins been impacted dramatically but worrisome signs are emerging among many of the creatures that form the backbone of the Gulf’s fishing economy.

In the wake of the spill, Gulf oysters near the most contaminated areas are turning up contaminated with nickel and vanadium, according to testing for heavy metals conducted by the Food and Drug Administration (FDA). However, some other metals, specifically arsenic, cadmium, lead, and mercury are “consistent with the background levels found in seafood not impacted by the oil spill and do not present a public health concern,” the FDA reports.

Before the Gulf spill, only one in 1,000 fish from the region had lesions or sores, but in the spill’s aftermath this ratio rose to as high as one in two fish in some of the most affected areas, according to University of South Florida researchers.

Fishermen, shrimpers and others who work in the seafood industry are in agreement, according to Al-Jazeera English, which released an in-depth report on deformities and mutation among shrimp, crabs and other seafood: They have never seen anything like this this before. Gulf fishermen said that their white shrimp catch has dropped to nearly zero and their brown shrimp catch has dropped by two-thirds. Other fisherman say they are faring even worse.

“We also seeing eyeless fish, and fish lacking even eye-sockets, and fish with lesions, fish without covers over their gills, and others with large pink masses hanging off their eyes and gills,” said long-time Gulf fisher Darla Rooks of Port Sulfur, Louisiana, adding that the amount of seafood she caught last year was “ten per cent what it normally is.”

Some of the most disturbing signs are found among shrimp, who are turning up not only without eyes, but without eye sockets. According to some in the industry, roughly half of the shrimp from Barataria Bay, a heavily impacted area of the Gulf that was formerly a favorite among shrimpers, were eyeless.

BP dumped more than two million gallons of the dispersant Corexit in hopes of breaking up the oil slick in the Gulf, which provides roughly 40% of the seafood caught in the US. The dispersants are mutagenic, which could be responsible for the seafood deformities, scientists say. Because shrimp are rather short-lived, many of the shrimp caught today, including the heavily deformed shrimp, represent the second or third generation since BP’s disaster began, a sign that the chemicals many have affected their genetic makeup.

“We are also finding eyeless crabs, crabs with their shells soft instead of hard, full-grown crabs that are one-fifth their normal size, clawless crabs, and crabs with shells that don’t have their usual spikes,” said Tracy Kuhns, a commercial fisher from Barataria, La, adding that these parts “look like they’ve been burned off by chemicals.”

BP has said that Gulf seafood remains safe. “Seafood from the Gulf of Mexico is among the most tested in the world, and according to the FDA and NOAA, it is as safe now as it was before the accident,” the company said in a press statement recently.

Clearly, the full impact of the worst environmental disaster in American history will take time to emerge. Be that as it may, Democrats and Republicans are both eager to accelerate drilling. The Obama administration has approved more than 500 permits for oil wells in the Gulf. In June, the administration will also hold a 38 million acre lease sale. The administration has been issuing new drilling permits at a fast rate—32 such permits were approved during February, the highest number in one month since May 2007, long before the spill.