Global Warming Divide Expanding, Even Within The GOP

Even with a strong majority in Congress and control of the White House, the GOP is still having trouble getting its ducks in a row regarding its stance on global warming. Against the backdrop of President Bush for the first time acknowledging scientific consensus that man-made greenhouse gases are increasing global temperatures, House Republican Sherwood Boehlert of New York last week publicly denounced a request by House Energy Committee Chairman (and fellow Republican) Joe Barton of Texas to gather extensive research data as well as financial information from three scientists who authored a controversial 1998 study finding that the 20th century was the warmest century on record, and that temperatures began to increase sharply during the 1990s. 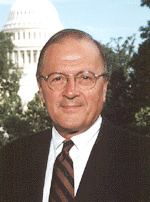 The study, which validated as many as 20 similar analyses, was cited by the United Nations" Intergovernmental Panel on Climate Change in 2001 as evidence for the need to take strong action to mitigate global warming.

Boehlert thinks that Barton and other House Republicans are trying to intimidate and/or silence scientists working on climate change issues. Boehlert considers the Energy Committee requests to be intrusive, commenting that the action “raises the specter of politicians opening investigations against any scientist who reaches a conclusion that makes the political elite uncomfortable.”

In response, House Energy Committee spokesperson Larry Neal replied, “Chairman Barton always appreciates heated lectures from Representatives Boehlert and Waxman, two men who share a passion for global warming. We regret that our little request for data has given them a chill. Seeking scientific truth is, indeed, too important to be impeded by politics, and so we’ll just continue to ask fair questions of honest people and see what they tell us. That’s our job.”