With all due respect Special Presidential Envoy John Kerry @ClimateEnvoy, you’re pussy-footing around with all your meetings in Berlin via your private jet. Mother Nature can’t wait for another PowerPoint presentation to tell her how much she’s gasping from the CO2 that’s currently at 419.13 ppm according to the Mauna Loa Observatory in Hawaii.

Instead of bloviating on Twitter that you are “encouraged by my meetings in Berlin” and that you’ll be back, do something; be like President Jimmy Carter.  Go big and install Solar Panels on all the Federal buildings in Washington, D.C.  Could you do that to show the world we must save this precious planet by actions, not more meetings?  Millions could be inspired to install Solar Panels to help decrease our dependence on the fossil fuels that are suffocating our planet.

“We’re on the verge of the abyss and are speeding toward a climate hell,” U.N. Secretary-General Antonio Guterres warned at President Biden’s climate summit attended by 40 nations.  CO2 emissions must decrease by 7.6 percent annually from 2020 to 2030 for the globe to have a fighting chance to avoid the ultimate collapse of Mother Earth!

“Winning the war requires governments to fight on the side of the people,” wrote James Hansen, Adjunct Professor, Department of Earth and Environmental Sciences at the Earth Institute at Columbia University on his blog on June 1, 2021.  “It hasn’t happened yet.  Our governments have too many politicians who are well-oiled, coal-fired, and full of gas. Instead, governments set goals for the future and heavily subsidize renewable energies.  The fossil fuel industry is pleased.  They smugly put windmills and solar panels on their websites.”

Proving Hansen’s point, the Biden Administration in late May quietly defended the Willow project, a huge oil drilling proposal on Alaska’s North Slope and earlier granted oil and gas leases on federal land in Wyoming.  Earthjustice says these actions are equivalent to launching “carbon bombs,” both of which were approved by Agent Orange in the last Administration.  WTF is going on?  Are you serious?

Despite the federal government and oil and gas companies employing decades of dithering, denial and dismissing climate scientists who have been spot-on for over 30 years, the American public finally has gone beyond this era of peak indifference and are realizing (for the most part) our overheated planet is our #1 threat.

Other nations, both large and small, have fully embraced the absolute necessity to go big and bold to try and stave off a pending global disaster.  And they’re certainly NOT approving plans that will help seal our doom!

Mr. Biden and Mr. Kerry, for the sake of our children and grandchildren, for your review and consideration, here are innovative projects that are proposed, under construction or completed and are addressing exigent environmental issues with multiple layers of benefits.  Please we must go big and bold …. or we will go extinct!

Here are six brilliantly-conceived projects that need to be replicated everywhere:

Go With the Wind …. Scarlett!

In late May, President Biden announced plans to open more than 250,000 acres off the California coast to develop wind farms.  With a goal of producing 4,000 megawattsof electricity to power 1.6 million homes, we need more huffing and puffing than that, Mr. President.  More like Denmark!

In late March, Denmark, with a population of only 5.8 million, approved the construction of a $34 billion Wind Farm with as many as 600 giant wind turbines that will generate up to 10 Gigawatts.  Even more brilliant that just plunking down more wind turbines in the North Sea, this project will also incorporate the world’s first “Hub and Spoke” man-made island wheelhouse that will not only transmit electricity to 10 million homes, but also produce green hydrogen from the seawater and large batteries on the island will store surplus electricity when demand is high or if other nations want to tap it.  In addition, it will also be an opportunity for this public-private partnership to work with mariculture and fisheries.  Coastal regions all across the world should seriously consider this monumental multi-level engineering marvel. 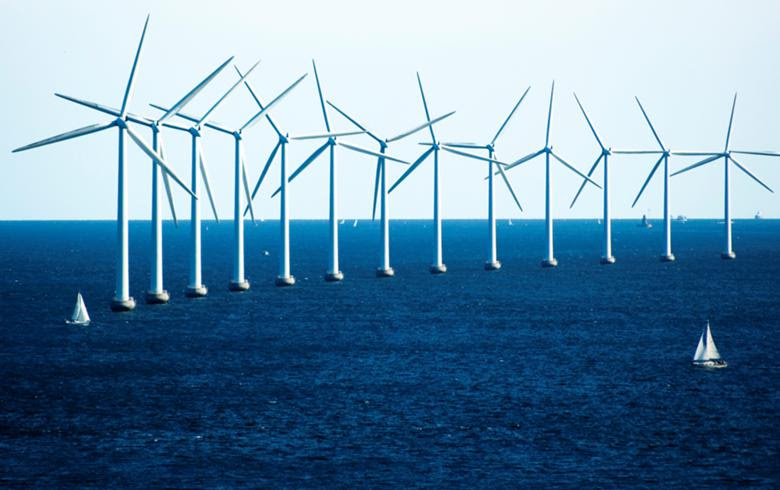 If there are venture capitalists looking for the next “real big thing” and want to quit fooling around with crypto, you need to step up and invest in massive Hydroponic farms to maintain and grow the never-ending need for healthy fruits and vegetables.

With weather-dependent farms under severe stress from drought and massive soil erosion around the world, Hydroponic farming and its multiple benefits could be a game-saver for a very hungry world experiencing rapidly-depleting natural resources.  Very simply, Hydroponic farms do not need soil for plant nutrition as the seedlings are fed nutrient-rich water in a greenhouse.  Formerly a hobby for hippies and hard-core vegans, Hydroponic farms are coming of age out of necessity.

With field farms accounting for 80% of the water usage in the United States — and much of it lost to evaporation — Hydroponic farms use 10 times less water because it’s delivered via a controlled system, with some facilities re-circulating that nutrient-rich water.  Also, plants on Hydroponic farms grow 30 percent to 50 percent faster than those grown in soil and deliver bigger yields per square foot.

One of the most innovative Hydroponic operations is Sundrop Farms located on its 65-hectare facility in a virtual desert near Port Augusta, South Australia.  Using desalinated water producing around 1 million liters of fresh water every day, its plant is run on solar power so it’s virtually carbon-neutral.  Also, its warehouse-sized greenhouses are  devoid of pests and weeds enabling year-round, truly sustainable production of over 20,000 tons of tomatoes.

Other large-scale Hydroponic or Aquaponic farms are sprouting in the Middle East, India, Canada and South Korea.  Hey Mr. Musk and Mr. Bezos, here’s something you can do for the world with your billions!

As Johnny Carson suggested decades ago, Californians could drop a brick in their toilets to save water during a drought.

For the current drought, the University of California at Merced has a more practical idea.  It recently published a peer-reviewed study that would save a lot of bricks and thousands of acre-feet of water from evaporation by installing solar panel canopies over the snakey California Aqueduct.

In its conclusion, the UC Merced study stated, “The net present value (NPV) of over–canal solar exceeds conventional over–ground solar by 20% to 50%, challenging the convention of leaving canals uncovered and calling into question our understanding of the most economic locations to locate solar power.”

This most innovative project could be a game-changing “4-for-1” by producing low-cost electricity; saving water from evaporation; cleaning the air along the canal by eliminating the current flock of dirty diesel pumps and saving the cost of purchasing acres of land that would have been used for solar panels.

As first reported in The Press Democrat, the City of Healdsburg in Sonoma County, California now has the largest “floating” solar farm in the nation producing 5 megawatts of clean power which is the sunny source of 8% of the city’s annual electrical needs.  Besides also blocking algae from blooming, the installation of the rows of solar panels only took 3 months from start to finish.

Highway to Solar Sanity: 20-Mile Bike Path with a Solar Roof in lieu of Median Strip

South Korea is pumped up on solar as its government and citizens are “all-in” for reaching carbon neutrality.  One of its most innovative projects is the 20-mile Solar Bike Highway running between Daejeon and Sejong that was constructed in 2014.

With three lanes of highway on either side, bikers have views of cars zipping by (photo below) while they pedal along in the median strip with solar panels soaking up the sun and protecting them from harmful rays.  Access to the bike path is via intermittent underground tunnels providing safe entry and exit.  But the best part is that the solar panels generate more than enough energy to power the 20 miles of freeway lighting as well as charging stations for the electric vehicles.

Buffalo Manure-to-Biomethane Will Mooooove the Masses in Karachi, Pakistan

With 50,000 gallons of fresh water wasted every day to wash 3,200 tons of water buffalo manure into the Arabian Sea, the Government of Pakistan has created an ingenious plan to save that water; protect citizens and buffaloes from fecal disease; reduce CO2 emissions by 240,000 tons per year and greatly improve its transportation network with 200 zero-emission buses powered by biomethane from its sacred cattle colonies.

“There are an estimated 177 bus rapid transit (BRT) systems in the world today,” emailed Lloyd Wright, Senior Urban Development Specialist at the Asian Development Bank in Manila, Philippines.”The ‘Karachi Breeze’ system is in a select group as one of the few ‘third-generation BRT’ systems which features the ability to offer services that operate on-and-off-corridor without forcing any customer transfers. It’s being designed as the ‘Gold Standard’ as defined by the internationally-recognized BRT rating system.”

The beauty of this project is reducing a serious health hazard and converting it into a green and sustainable fuel for the estimated 320,000 passengers who will be riding on these buses every day.  The cow dung will be dissolved in a bio-digester with bacteria which will then emit gases such as sulphur dioxide, nitrogen, carbon dioxide, oxygen and methane.  The separated methane which is a liquefied natural gas will be transported to CNG tanks at two designated bus depots where the buses will fuel up their cylinders on their roof tops.

Projected for completion in the fourth quarter of 2023, this brilliant waste-to-clean fuel system shows how political will can coalesce to build a showcase project that could inspire other private-public partnerships around the world to grab their bull crap by the horns and run their public buses on it!

John T. Boal was the Managing Director in the West for the New York-based Ad Council for 19 years and is a Co-author of Chicken Soup for the Volunteer’s Soul. He resides in Burbank, CA and occasionally tweets @CalifMaidenMan.