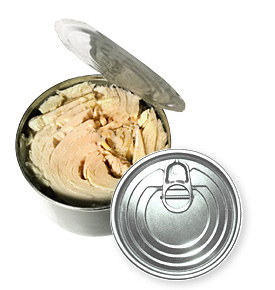 Americans love tuna, eating approximately $1 billion worth of canned tuna each year. In spite of a study published in Environmental Toxicology & Chemistry earlier this year that reported many top brands of canned tuna contain mercury levels higher than deemed safe by the U.S. Environmental Protection Agency (EPA), tuna remains the nation’s most popular seafood after shrimp. “We never say, ‘Don’t eat tuna,'” said lead study author Shawn Gerstenberger, a professor of environmental and occupational health at the University of Nevada Las Vegas. “We are saying if you are in a high-risk group (like pregnant women) and are worried about mercury exposure, there are some easy consumer choices you can make to limit exposure.”

But the health effects of methymercury exposure are just one “catch” to the popular lean protein. Canned tuna is typically skipjack or albacore, and the purse seine nets and longlines used to catch these fish are fatal and destructive to other forms of marine life.

Because fish are fascinated with floating objects and will gather around them in considerable numbers, tuna fishermen will use a “Fish Aggregating Device” (F.A.D), or a floatable object like a buoy, to attract schools of tuna, which they will then bring to the surface with a purse seine net. But an estimated 20% of what these purse seine nets pull in is “bycatch” like sharks, swordfish, marlin and young yellowfin and bigeye tuna. Longlines can also have bycatch rates as high as 30%. Longlines stretch for miles, with baited hooks hanging down every few yards. Turtles get snagged on the hooks and can’t return to the surface to breathe. Seabirds think the hooks are fish, dive down, and get caught.

Dolphins are also a victim of tuna-fishing bycatch, particularly in the tropical Pacific waters off of Mexico and Central America where tuna and dolphins tend to swim together. According to the Earth Island Institute, millions of dolphins have lost their lives in tuna nets, but their annual death rates have dropped significantly thanks to biologist Sam LaBudde. In 1988, LaBudde went to work as a cook on a Panamanian tuna boat, where he secretly filmed dolphins being crushed and killed in nets, as many as 20 for every tuna. His footage was shown to a Senate subcommittee, and by 1990, the Dolphin Protection Consumer Information Act was passed. This act mandated standards for labeling tuna “dolphin-safe,” declaring that no tuna caught by setting a purse seine net around dolphins could be labeled “dolphin safe.” Popular tuna brand Starkist announced it would only buy tuna from fisheries that complied with the new mandate. Bumblebee, Chicken of the Sea and over 90% of the world’s tuna canners have followed suit.

The new label has greatly affected the tuna market in Mexico, which, for financial reasons, has refused to discontinue dolphin-dangerous methods to capture tuna. Now Mexico claims a third of their tuna industry has been shut down due to “dolphin-safe” labeling, but a new ruling by the World Trade Organization (WTO) could remedy that. On September 12, the WTO concluded that the American labels ensuring dolphin protection, while not purposefully discriminating against Mexican producers, were more restrictive than they needed to be to protect dolphins and inform consumers.

“The Mexican government is trying to spin this mixed decision into a win for their continuing to chase and net dolphins in pursuit of tuna,” said David Phillips, executive director of Earth Island Institute. “This is far from the truth. The WTO panel expressly stated that Mexico’s method does not meet the U.S.’s legitimate objectives to ensure that tuna caught by methods that harm dolphins is not falsely labeled for consumers as ‘Dolphin Safe.’”

Andrea D. Mead, a spokesperson for the United States trade representative’s office, said that her office was “very concerned” by the finding.“We are carefully considering all of our options with respect to this finding, including an appeal,” she said. Todd Tucker, research director with Public Citizen’s Global Trade Watch, said appeals of WTO rulings have a poor track record and the decision could mean that “the U.S. will have to water down dolphin-safe tuna labels or face trade sanctions.

Tuna lovers concerned about bycatch can support companies like Raincoast and Wild Planet, who choose not to use longline in order to help eliminate unintended bycatch. But these ocean-friendly brands are sold with a premium price tag that ranges from $5 to $7 per can, or more than double the grocery store price of major label brands.

Those not willing to spend more may want to consider a switch to canned salmon, which the nonprofit organization Oceana notes is “a better option for keeping our oceans healthy” than tuna. This is in part because salmon populations are easier to manage—they return to spawn in the place where they were born, allowing fishermen to determine what their yearly production can be without damaging the population. And the majority of canned salmon comes to our supermarkets from Alaska, an area that has been “Certified Sustainable” by the Marine Stewardship Council.

In contrast, tuna range far and wide across the oceans. Additionally, tuna stocks are fished by multiple nations simultaneously, making catch data imprecise and hard to obtain. The health benefits of salmon are also greater. Pinks, chums and sockeyes—the salmon most commonly used for canning—have far less mercury and as high if not higher heart-healthy omega-3 fatty acids as tuna.