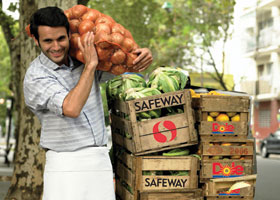 Emily Achenbaum Harris arrived at the local farmers’ market in Charlotte, North Carolina, just as vendors were opening their stands. As she walked from stall to stall, she noticed Dole boxes tucked under tables and watched as a farmer dumped blueberries out of plastic supermarket containers into the blue felted containers ubiquitous at local farm stands.“I felt duped,” says Achenbaum Harris. “As soon as I saw what was happening, I knew it was a scam; [the vendor] was taking advantage of the fact that farmers’ markets are popular and knew he could profit from reselling produce.”

This deception is happening at farmers’ markets across the nation. A growing number of vendors are taking advantage of the popularity of farmers’ markets, setting up stalls to hawk imported fruits and vegetables or resell supermarket produce.

In California, one vendor, Rancho Las Gordonises, was repeatedly charged with deceptive practices. Torrance Farmers Market expelled the vendor for reselling tomatoes imported from Mexico as “local”; the operator was also fined by both San Diego County and San Bernardino County in 2009 for reselling produce. 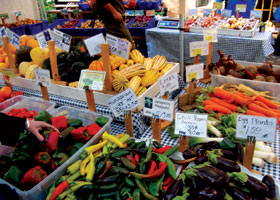 Resellers are motivated by profit. In 1994, there were just 1,755 farmers’ markets in the U.S. In 2011, that number jumped to 7,175, according to the U.S. Department of Agriculture. The growth should be good news: More markets means increased access to fresh, local and often organic foods. But the increase in fake farmers’ markets and deceptive market practices means that consumers could end up inadvertently paying more for produce that’s shipped from afar.“When people go to the farmers’ market, they think they’re buying from farmers but that isn’t always the case,” says Sharon Yeago, president of the Farmers Market Coalition, a nonprofit advocacy group supporting farmers’ markets and market managers nationwide. According to Yeago, many markets allow resellers [vendors who purchase produce from other sources, including importers, and sell it for a profit] and may not require those vendors to disclose the source of their products. “Some markets have no regulations at all,” she says. “At those markets, it’s OK to sell anything—even if it was grown in another country.”

Corporations are also trying to capitalize on the popularity of farm fresh produce to boost profits. In June 2010, the supermarket chain Safeway advertised “Farmers’ Markets” at multiple stores in the Seattle area. Their market consisted of tents set up in store parking lots where staffers, not farmers, sold store produce. The Washington State Farmers Market Association (WSFMA), contacted the grocer’s corporate offices and explained that state law mandated that farmers’ markets be made up of farmers selling directly to the public.“Because farmers’ markets disappeared for a couple of generations and are just making a comeback, there is a lot of confusion about what the term means,” says Joel Wachs, past president of WSFMA who took a lead role in contacting Safeway last summer. “We objected to Safeway calling their event a ‘farmers’ market’ because it was produce dragged from the store into the parking lot with no labels or indication of where it came from.”Safeway was cooperative, changing the name of its parking lot produce displays to “Outdoor Markets.” Even with the change, Wachs suspects that shoppers purchased produce from the outdoor stands believing they were supporting local farmers. 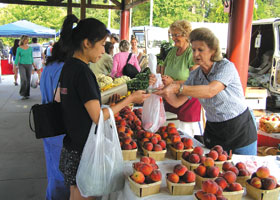 At some farmers’ markets, weak rules and a lack of legislation about who can set up booths creates confusion. Yeago isn’t against allowing resellers at farmers’ markets, noting that some brokers purchase produce from local farms or supplement locally grown fruits and vegetables with imported products. The key, she believes, is transparency. “If you’re selling peaches from South Carolina at a market in Florida, there should be a note on your price card telling shoppers that it is not a local product,” Yeago says.

Concern over consumer deception has led some markets to adopt strict regulations to ensure shoppers that their farmers are the real deal. At the Dane County Farmers Market in Madison, Wisconsin, all products must be grown or raised locally; resellers are not permitted in the market. Dozens of other markets across the country, including the Carrboro Farmers’ Market in North Carolina, the Dallas Farmers Market and Memphis Farmers Market (memphisfarmersmarket.org) all have similar regulations. WSFMA is a little more lenient, allowing resellers but requiring 50.1% of all market sales to be generated by farmers selling directly to the public.

Frustrated with the deceptive practices at her local market, Achenbaum Harris never returned. “I started shopping at markets with stricter regulations where the farmers had been vetted by reputable groups and I could feel comfortable buying from them,” she says. “[My experience] was a good reminder that I should always be a critical shopper.” 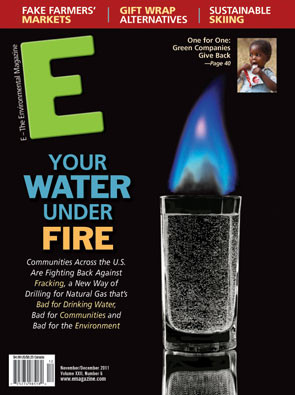