The scent of sage and the pounding hooves of abundant wild game are a memory to the Skull Valley Band of Goshute Shoshone Indians in Utah, an hour from Salt Lake City. Today, when the people look north from their 18,000-acre reservation, they smell chlorine gas from the Magnesium Corporation plant, identified by the Environmental Protection Agency (EPA) as the most polluting plant of its kind in the country. 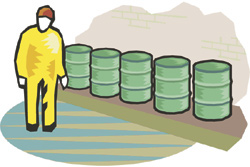 Turning northwest, they see the Envirocare Low-Level Radioactive Disposal Site, where waste from the entire country is buried. The site has neighbors: two hazardous waste incinerators and one hazardous waste landfill. Directly south, there is the Intermountain Power Project, which provides coal-fired electrical power mostly to California but pollutes local skies. Finally, to the east, lies the world’s largest nerve gas incinerator.

And now pending is a plan to transport 44,000 tons of radioactive waste (80 percent of the entire U.S. supply) for interim storage on leased reservation land. The Nuclear Regulatory Commission (NRC) Atomic Safety and Licensing Board ruled in favor of granting a license to Private Fuel Storage (PFS) last February.

Tribal Chairperson Leon Bear, a primary supporter of the lease, signed the agreement despite significant tribal opposition at public hearings. “They’re treating the tribe as invisible people,” says Kevin Kamps, nuclear waste specialist at Nuclear Information and Resource Service (NIRS) in Washington, D.C. “The company says, “If there was an accident it would only extend out two miles.” But that includes the entire Goshute community.”

An NIRS petition protesting the plan contains signatures representing 31 Native nations, a variety of national and international groups, and numerous state and local agencies. According to the petition, “The storage/transport containers are of questionable structural integrity and there is an increasing risk that PFS could well become de facto permanent storage.” Among the petition signatories is the Indigenous Environmental Network (IEN) in Minnesota.

“We believe this country has an unsustainable energy problem,” says IEN Executive Director Tim Goldtooth, a Native American member of the Dine” (Navaho) and Dakota tribes. “What right do we have to leave this problem for future generations? It reflects a society out of balance with the sacredness of nature.”

The Nuclear Energy Institute defends the location of the federal dump. “It was kind of a natural match between people looking for a place to store nuclear waste and people looking for economic development,” said senior project manager Rod McCullum to the San Diego Union-Tribune.

Kamps adds that if President Bush achieves his nuclear revival goals, uranium mining on tribal lands would probably be revived. McCullum agrees, noting that “anyone who wants to move forward with nuclear energy realizes we have to take care of the waste.”