From the Editors of E Magazine February 1, 2008 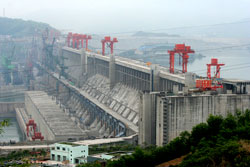 With the Nature Conservancy"s help, China hopes to control devastating floods from its Three Gorges Dam.

The Nature Conservancy, the world’s leading international land conservation nonprofit, announced last week that it will be helping the government of China carry out a feasibility study on how to manage flood plain risks downstream from the controversial Three Gorges Dam, a colossal hydro-electric generating facility located on the Yangtze River. While China has been able to generate considerable inexpensive and renewable electricity for millions of Chinese at Three Gorges, the dam there has failed to tame annual floods responsible for tens of thousands of deaths over the past century.

The Nature Conservancy has been tasked with helping the Chinese government devise and implement a plan to minimize impacts of the Three Gorges dam on downstream ecosystems and communities, while re-assessing the water retention standards at several upstream dams. The idea, which the Nature Conservancy pioneered through its work in the U.S. with the Army Corp of Engineers, is to restore the river’s seasonal flows by letting more water pass through instead of holding much of it in reservoirs along its course. Besides the environmental and safety benefits, reducing the amount of water retention at the upstream dams could generate an additional $1 billion in annual electricity-generation revenues, the group says, that could go toward additional downstream warning systems, flood insurance and ecological protection.

The unique partnership was launched in 2005 when Henry Paulson, at the time chairman of the Nature Conservancy and CEO of investment bank Goldman Sachs (and now U.S. Treasury Secretary), wrote a letter to Chinese Premier Wen Jiabao detailing how the group could apply the expertise it developed working on dam projects in the U.S. to the Three Gorges region.

While the Nature Conservancy, which has been criticized for its coziness with corporations and governments, doesn’t support dams or hydro-electric projects per se, it acknowledges the need for more electricity in China and believes it can help the Chinese government manage its resources better. "These dams will be built," Guo Qiaoyu, the group’s Yangtze River project manager, told reporters. "We must use our experience and knowledge to reduce their ecological impact."