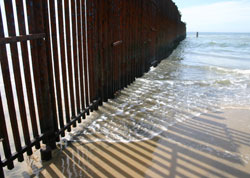 Last week, U.S. Department of Homeland Security (DHS) Secretary Michael Chertoff announced that the Bush administration was waiving compliance with some 30 environmental and land management laws to expedite the completion of a 470-mile-long fence along the U.S./Mexico border to keep illegal immigration in check. By invoking the waiver, DHS can forego the usual detailed reviews of how their project will affect wildlife, water quality and vegetation in the area, despite objections from biologists that the fence will disrupt wildlife migrations, including that of the endangered jaguar.

Two of the nation’s leading environmental nonprofits, Defenders of Wildlife and the Sierra Club, consider such waivers unconstitutional, and are asking the U.S. Supreme Court to step in to block the waivers, which exempt the federal government from laws designed to ensure clean drinking water while protecting wildlife from habitat loss and land and waterways from contamination.

"It is this kind of absolute disregard for the well-being and concerns of border communities and the welfare of our wildlife and untamed borderlands that has forced [us] to take a stand," says Rodger Schlickeisen, president of Defenders of Wildlife.

For its part, though, DHS is not backing down. "Criminal activity at the border does not stop for endless debate or protracted litigation," Michael Chertoff, head of DHS, told reporters. "Congress and the American public have been adamant that they want and expect border security. We’re serious about delivering it, and these waivers will enable important security projects to keep moving forward."