Saving the Chesapeake With Federal Funds 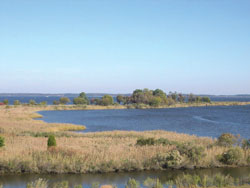 For many Virginia poultry and cattle farmers living along the Chesapeake Bay, the largest estuary in the U.S., federal funding is the key to keeping the water clean. The bay is suffering from algae blooms and a decline in fish habitat caused by excess nutrients from nearby farms.

"These programs are important to reducing agricultural runoff," says Chuck Epes, a spokesman for the Chesapeake Bay Foundation (CBF). "If Congress doesn’t reauthorize the bill, conservation programs for farmers will die with it."

But those funds are now resting in the hands of the Senate as lawmakers wrestle with the 2007 farm bill. The 2002 bill expired September 30, and no new legislation had passed at press time. If the bill doesn’t pass, farmers like Scott Funkhouser in the scenic Shenandoah Valley won’t be making a positive impact on waters running into the Chesapeake Bay. Funkhouser, who owns a 41-acre-poultry and cattle farm in Rockingham County, used money from the federal Conservation Reserve Enhancement Program to install a 50-foot-wide riparian buffer zone along the banks of a stream running through his farm.

"I wanted to do my part to keep the waters clean," Funkhouser says. The zone, containing 450 hardwood trees, shrubs and natural grasses, cleans the creek where cows used to bathe and defecate.

And the implications of his actions don’t stop in the Chesapeake Bay. Long Meadow Creek, which runs through Funkhouser’s farm, dumps into the North Fork of the Shenandoah River, one spot in the state where mysterious fish kills occur, affecting smallmouth bass and redbreast sunfish. According to two Virginia scientists, the poultry litter farmers apply to their fields could be responsible. Arsenic contained in poultry litter causes fish immune system dysfunction. But last year alone, a third of the farmers who applied for assistance to one conservation program were turned away because of shortage of funds, according to CBF.