Is this a Marriage Made in Utah?

It takes only a sip of Polygamy Pale Ale at Rooster’s Brewing Company in downtown Ogden to suspect that the conventional perceptions of Utah as a conservative Mormon hideaway are slowly shifting. 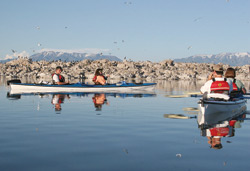 Ogden, which lies 35 miles north of Salt Lake City is now poised to become a popular year-round tourist destination for outdoorsy types who seek an alternative to Colorado’s saturated ski resorts and sky-high tourist towns. The Wasatch Mountain Valley features miles of hiking and biking trails and two ski resorts. Despite the opportunities, Ogden now faces the same challenge as many nature-centered towns—how to best promote the natural world without exploiting it.

Once a major hub during the days of the Transcontinental Railway, Ogden fell on hard times with the loss of rail travel. The city is now pursuing an aggressive campaign to increase growth and tourism based on its desired identity, in the words of Mayor Matthew R. Godfrey, as "The high-adventure recreation world capital." Some community members, however, including the group Smart Growth Ogden, question the wisdom of proposed development projects at the expense of the local environment.

Two ski resorts—Snow Basin and Powder Mountain—already stud the surrounding Wasatch Front, and a proposed project would add a third, as well as 400 new residential homes, a redesigned golf course and a gondola connecting the new resort to downtown. Amer Sports Corporation is moving its North American headquarters to Ogden, and a proposed High Adventure Recreation Center is set to include sky-diving, rock-climbing, two kayak parks, bouldering, skiing and—yes, in Utah—surfing. Wal-Mart is set to move in, but funding for Union Station, the town’s number one historic site, has just been slashed.

Some residents are excited by the pace of change. "It’s really starting to happen in Ogden," says Mary McKinley, executive director of the Ogden Nature Center, which has had a community presence for 31 years. "We haven’t had a huge boom yet, but it’s beginning."

The nature center boasts not only passive solar and geothermal technology, but its classrooms feature biocomposite cabinets that incorporate locally derived wheat chaff, crushed sunflower seeds and compressed newspapers. 13-inch by 13-inch "windows" let visitors peek into the north-facing wall to see natural insulation, including shredded recycled blue jeans, cellulose and straw bales. Even the bathroom stalls are made of recycled milk cartons, and the goat-hair carpets are green.

Scott Baxter, owner of Great Salt Lake Adventures, located 20 minutes south of Ogden, puts it bluntly. "I live in an area where many people enjoy the outdoors and, to a large degree, exploit the outdoors," he says.

Baxter leads kayak trips on the Great Salt Lake and hopes that getting people out onto the water will foster a sense of stewardship for the unique, fragile eco-system there.

Threats to the lake include high mercury and selenium content, as well as toxic run-off from agriculture and residential development. And an increasing population requires additional fresh water, which is dammed for irrigation and drinking. According to Baxter, the lake "is not especially attractive to many people. It lacks grassy shorelines, shade trees, fish
[but] that is also what makes it special. You get to know it slowly."

While the Great Salt Lake might look barren, it is a critical ecosystem for six million migratory birds along the Pacific flyway. Approximately 400,000 Eared Grebe stage on the Great Salt Lake during their migration to Mexico, relying on the lake’s population of brine shrimp to gain enough weight for their nonstop flight.

In nearby Brigham City, the Bear River Migratory Bird Refuge covers approximately 75,000 acres and is home to the largest freshwater component of the Great Salt Lake ecosystem. Following the completion of the Visitor’s Center in 1983, the Great Salt Lake flooded, destroying the building and damaging the ecosystem with the inundation of salt water. According to Kathi Stopher, the Refuge’s volunteer coordinator, residents, advocates and public officials fought for federal funding that would allow them to rebuild and repair.

"I watch the birds come and go each spring and fall, and I think about the relationship they have formed with this lake over thousands of years," Baxter says. "It sobers me as I think of all the threats that may destroy this relationship and that most of those threats have been created by my species, a relative newcomer to the area."

BRIANNE GOODSPEED is a journalism graduate student at the University of Southern California.