Uncovering the Secrets of the Far East Diet

Asian food is everywhere. Cheap packets of ramen noodles make up a large portion of a typical college student’s diet. Green tea is a common sight on grocery store shelves, not only as a drink but also as a dietary supplement. Egg rolls, wonton soup and chicken lo mein taste delicious when eaten out of those cardboard take-out boxes. But how healthful are those soy sauce-soaked noodles? The nutritional value of Asian food directly relates to how the food is prepared, how large the portion size is, and how "Americanized" the food is. 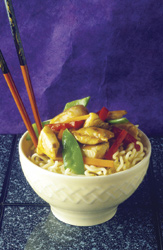 When it comes to preparing Chinese, Japanese, Korean or Thai food, stir-frying and steaming are without a doubt two of the best ways to cook. Allison J. Stowell, a registered dietitian and co-founder of Beyond Health, a wellness organization for women based in Bedford Hills, New York, says that very little oil is needed for stir-frying, in contrast to the oil bath used for French fries. Food cooks a lot faster when you stir-fry. "Cooking fast not only retains flavors, it keeps the rich color in veggies that represents the vitamins, minerals and antioxidants," Stowell explains.

One oil commonly used in stir-frying is sesame seed oil, which has a high specific heat so you cook faster, leading to a fresher final dish. Stowell says a whole variety of foods can be used when you stir-fry. She adds that the fried foods you can get in many Asian restaurants represent a more Western way of cooking, and fail to give the same benefits as steaming or stir-frying.

Tea drinking started in India and China thousands of years ago. Although tea has been hailed for its health benefits for centuries, it’s only recently that researchers have been investigating its chemical properties in detail. According to the National Cancer Institute, investigators are especially interested in "catechins," which are antioxidants found in green tea. "Possibly because it is less processed, green tea contains higher levels of antioxidants than black tea," the Institute explains. "Although tea is consumed in a variety of ways and varies in its chemical makeup, one study shows that steeping either green or black tea for about five minutes releases more than 80 percent of its catechins." 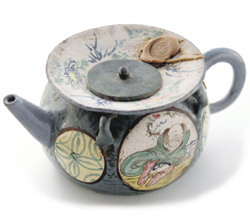 Interestingly, the amount of catechins in instant iced tea is negligible. "Green tea is popular in part because it’s a source of antioxidants and an energy stimulant," says Stowell. "Many people use it for improving metabolism," she adds. Stowell explains that antioxidants work to disable free radicals in our systems, which can cause disease and promote aging.

A common trend for many people who don’t drink tea but desire the benefits is to take a green tea supplement. Stowell warns that the government does not regulate anything sold or defined as a supplement. "It’s a free-for-all when it comes to this stuff," Stowell says. With all dietary supplements you should check with your doctor before you start taking them. For instance, researchers are unsure exactly how many cups a day is needed for a person to benefit from the antioxidants.Japan-born Maria Yoesoep, a former chef of Country Kitchen in Dover, Delaware, says that in her home country, green tea is traditionally served with all three main meals of the day. She says tea also often accompanies snacks.

One of the most fascinating elements of the traditional Asian diet is the nutritious benefit of one little bean. Soybeans have sustained Eastern populations for thousands of years. And it’s no wonder! This little legume is packed with protein, fats, fiber and carbohydrates. Dr. Stephen Holt writes in Soya: For Health (Mary Ann Liebert, Inc. 1996), "In China, Japan and adjacent Asian communities, soy is a dietary staple. Epidemiological and scientific studies provide overwhelming evidence that soy consumption plays a major role in the lower incidence of breast, prostate and colon cancer in Asian countries."

Soy has estrogen-like properties, which may explain how it works in cancer prevention. Stowell suggests using soy to help ease the symptoms of menopause in women instead of risking the problems associated with estrogen therapy.

Soybeans can be eaten in several forms, from a milk substitute to tofu. Tofu is made from the "milk" of soybeans and has the ability to pick up the flavor of the dish it’s being cooked with. Miso is fermented soybean paste that is made into a popular soup in Japan. Miso may be good for smokers, since it is thought to have a cleansing ability on the body and is believed to protect against nicotine. If you’re suffering from a nasty hangover, you might want to try miso, which can readily replenish your body with lost vitamins and minerals.

Some critics argue that large amounts of soy in the diet can be harmful (see "Sorting Out Soy," Eating Right, July/August 2002). But Holt writes, "Soy-based diets are safe and provide powerful health benefits." Also, 80 percent of U.S. soybeans are genetically engineered. Currently, researchers are not sure how much soy is too much. Some question how Westerners will respond to an increase of soy in their diet, especially if the increase trumps the levels traditionally consumed by Asians.

The Secret to Eating

Traditional Asian cooking is really a completely different approach to eating. "Americans can benefit from it," Stowell says. The meal comes in smaller pieces, and is traditionally eaten with chopsticks. Stowell says Americans have this idea of chowing down. By eating slower, you are enjoying your food more, savoring the tastes, with the end result of feeling full instead of "stuffed." Stowell warns that eating Asian food won’t solve any problems if we continue to fill our plates and eat as fast as possible.

Another important health benefit of eating Asian is reducing meat intake. Neal Barnard and Kristine Kieswer write in Food For Thought: The Debate over Eating Meat (Prometheus, 2004): "In Asia, a traditional diet using rice and vegetables as staples has served the population well, leading to lower rates of serious illness. By contrast, in North America, where diets are based on meat and dairy products
heart disease, diabetes and cancer are rampant."

"In America, there’s bacon and sausage for breakfast, sandwich meat for lunch and meat for dinner. It’s not so in Japan," Yoesoep explains. "Instead of using a pound of meat, I use four ounces. Plain tofu is often eaten in the morning with a touch of ginger, or miso soup with tofu on the side."

It’s hard to talk about Asian foods without bringing up monosodium glutamate, more commonly referred to as MSG. The odorless, tasteless white powder is a salt of an important amino acid that occurs naturally in your body. How exactly it works to add flavor to foods isn’t completely understood, although some scientists believe MSG reacts with receptors on the tongue.

MSG is found in items ranging from soy sauce to some infant formulas, and some people complain of adverse health effects from consuming it. In 1992, the FDA re-examined MSG (it was first appro

ved by the agency in 1958) and again concluded it was safe. Stowell says she agrees with the FDA’s ruling, but adds, "Personally, I stay away from it because I think it worsens my migraines."

Many people wonder how necessary MSG is, since more natural seasonings can perform the same function. "I don’t want to use chemicals in my cooking," Yoesoep concludes, although she points out that MSG is very popular in China and Japan.

KATE SLOMKOWSKI is an E intern attempting to learn how to eat with chopsticks.