The Greening of Gotham? 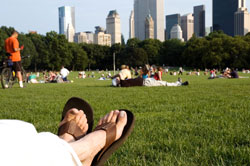 Greening up NYC could mean everything from more trees to more tolls.© Getty Images

New York City Mayor Michael Bloomberg used the occasion of Earth Day to unveil 127 new environmental initiatives aimed at greening Gotham over the next two decades. With the city likely to take on an additional million residents by 2030—up from 8.2 million now—Bloomberg thinks that addressing environmental issues now may be the only way to deal with the inevitable future strain on infrastructure and natural resources.

A centerpiece of Bloomberg’s greening plan is a proposal to plant a million new trees in the city by 2017 in order to help cool temperatures, remove air pollution and reduce smog there. Studies have shown that trees over roads help decrease the near-surface air temperature by 3.5 degrees. The city will more than triple its current annual spending on urban forestry initiatives. Bloomberg reasons that ambitious tree planting programs (which have occurred several times in the city over the years) help counteract the so-called urban heat island effect that is only aggravated by global warming.

Another important component is a plan, modeled on London"s, to charge weekday motorists $8 to enter Manhattan south of 86th Street from the north (people coming to Manhattan via bridges and tunnels already pay similar fees). The fee would be in place from 6 a.m. to 6 p.m. Many of the mayor’s new initiatives, including the congestion fee, tie into a larger goal of reducing New York City’s greenhouse gas emissions by 30 percent over the next two decades.

While some critics say that Bloomberg should be focusing more attention on economic development and preventing terrorism, the outgoing mayor—term limits prevent him from running again in 2009—thinks that there is no time like the present to step up the city’s environmental initiatives. "Our economy is humming, our fiscal house is in order and our near-term horizon looks bright," he told reporters. "If we don’t act now, when?"