The Reality of Rio 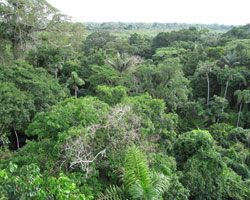 International commitments toward environmental conservation could be on the horizon this week, with an estimated 50,000 people and over 130 world leaders set to attend the United Nations Environment Programme (UNEP) Conference on Sustainability and Development in Rio de Janiero, Brazil. The conference, nicknamed Rio+20 to signify the 20 years since the first Rio de Janiero Earth Summit in 1992, will largely focus on food, energy, water, oceans and “livable” cities that thrive on sustainable economic development.

“Rio+20 is our opportunity to establish a new paradigm for growth—building on what works, discarding what does not,” UN Secretary-General Ban Ki-moon said. “We need nothing less than a revolution in our thinking about the foundations of dynamic growth and the well-being of future generations. A successful outcome in Rio will reverberate throughout the world. It could set the stage for broad-based, equitable and dynamic growth and development for a generation.”

The original Rio Summit, then the largest gathering of world leaders, produced three global treaties—the Convention on Biological Diversity, the United Nations Framework Convention on Climate Change and the United Nations Convention to Combat Desertification. Additionally, a 40-chapter report known as Agenda 21 was drafted to outline —among other goals—a bold and unified shift toward long-term environmental protection.

Yet when UNEP researched how far governments had implemented measures they had endorsed in 1992, they found that of the 90 most crucial agreed-upon goals, “significant progress” had been made on only four: removing lead from petrol; phasing out the use of chemicals that destroy the ozone layer; increasing drinking water supplies to the poor; and increasing research on pollution of the seas. Despite the ambitious worldwide gathering, carbon dioxide (CO2) pollution has skyrocketed to all-time highs and, subsequently, an unprecedented 400 parts per million of CO2 now clogs the atmosphere.

“Last time in Rio we had an unreasonable faith in governments,” said Camilla Toulmin, director of the International Institute for Environment and Development, a nonprofit organization based in London. “Since then we’ve lost our innocence in believing government was wise and benevolent and far-sighted.”

Critics say strong, fast policies are unlikely to sprout from Rio+20—especially considering President Barack Obama, British Prime Minister David Cameron, German Chancellor Angela Merkel and the entire European Parliament have declined to attend and the expected outcome document, titled “The Future We Want,” still remains largely under negotiation. But scientists and the environmental community remain hopeful that the event, which will feature hundreds of presentations, will provide a platform for effective solutions to alter the increasingly dismal fate of planetary life support systems. According to the UNEP Global Environmental Outlook report, 20% of all vertebrate species are threatened with extinction, 75% of the world’s coral reefs are threatened, the number of “dead zones’ in the oceans is rising rapidly, nine-tenths of all fish are contaminated by pesticides and greenhouse gas emissions may double over the next 50 years.

Pressing issues surrounding the growing global population—which is expected to reach 9 billion by 2040—also looms over Rio+20. By 2030, the world will need at least 50% more food, 45% more energy and 30% more water. Already, 85% of all fish stocks in the oceans are overexploited, depleted or recovering, and global natural resource consumption is 50% higher than what can be regenerated. Additionally, over 80% (some 30 million pounds) of antibiotics in the U.S. are used to stimulate growth in cramped, factory-farm raised livestock for growing meat demands.

If successful, Rio+20 talks could spark action on protecting the world’s oceans (99% of which are currently unprotected), the establishment of a powerful global agency for the environment and the appointment of an ecological high commissioner. National environmental initiatives will also be addressed, including Ecuador’s Yasuni-ITT proposal, which aims to save 10,000 square kilometers of pristine wilderness (once called “one of the most biodiverse places on Earth” by Dr. Jane Goodall) from oil drilling.

“Rio+20 is everyone’s conference, just as it is everyone’s planet. Its goals, aspirations and its outcome will belong to all of us,” said Rio+20 Secretary-General Sha Zukang, adding that “the success of Rio+20 should be measured by the amount of actions it inspires. I believe that after seeing the possibilities of a better tomorrow, participants will leave Rio+20 with a renewed commitment to seize opportunities at different levels that will move us all forward on a path to the future we want.”