Three Myths along the High-Tech Trail: Invoking the Precautionary Principle

As a philosopher I often stand aghast at the manic speed culture we live in. My son’s Motor Trend touts the Mazda Speed-3 with this eye-catcher: "How to go 150 MPH for under $25k." The Bugatti Veyron will take you from 0 to 100 in 5.7 seconds! The need for speed pervades the whole culture, from fast food to pharmaceuticals. Incredibly, we prescribe new medications before time-consuming tests can be done and then, in too many cases, we recall them. American investors demand a quick return, so businesses have to run at a frenetic pace. High tech is an integral part of this scenario. A computer and a high-speed Internet are necessary to keep pace, or perhaps the high-speed technology is part of the cause of our frenzy.

The high-tech industry is a prime example of a fast-growing business. Only some 30 years old, it now plays an essential role in the Information Age. Amid all this speed, I ask my reader to slow down for a moment or two and consider three myths about this new high-tech addendum to our culture.

" Myth Number One. The high-tech industry is a clean industry. High-tech corporations like Intel are not associated with black smoke and soot belching from chimneys. Emails can be transmitted without paper, thus sparing the trees. Cell phones are the icon of the wireless age—small, innocuous tools of the Post-Industrial Age that contrast with jackhammers and bulldozers. These high-tech devices are getting smaller and smaller in physical space while enlarging their potency in their unique new realm—cyberspace. So high-tech devices do not use heavy metals and they do not cause water or air pollution. It is a "clean fact" that computers can help us save trees, but the idea that high-tech devices are small and innocuous ignores some dirty facts: computers, cell phones and their kin contain heavy metals such as lead and mercury which damage the environment and human health. Add the fact that the numbers of these devices are increasing exponentially, and that only 10 percent of them get recycled—and we have a virtual disaster. The Environmental Protection Agency (EPA) has estimated that 40 percent of the lead in U.S landfills is from discarded electronics. Computer monitor glass and TV screens contain lead. The funnel that sits behind traditional vacuum-tube TV screens is 25 percent lead. From landfills the lead leaches into the water, and from there into fish, animals and human tissue. It is toxic even in low concentrations, so it causes fetal damage and neurological damage to children and adults. Mercury is also used in many of these devices, including the new liquid crystal display screens. The toxic properties of mercury are pervasive and traces may wind up in your tuna sandwich.

The high-tech industry is not clean. Cyberspace is connected to physical space and to the environment. Like many other products, electronics have a dirty side; and we have not even mentioned the mining of metals, the production and disposal of plastics, and the fossil fuels used to transport the products. What makes high tech products unusual and ominous is their increasing numbers, their short life span before disposal, and their low recycle rate. No wonder the Wall Street Journal looked at the high-tech growth rate and in 2004 called e-waste "the world’s fastest growing and potentially most dangerous waste problem." 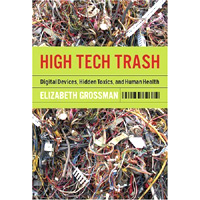 " Myth Number Two. The new European Union (EU) standards for electronics—Waste Electronic and Electrical Equipment (WEEE) and Restriction on Certain Hazardous Materials (RoHS)—will soon become universal, phasing out hazardous material and requiring computers, cell phones and other gear to be recycled. We need to be very cautious—not to say cynical—about the EU attempts to solve these problems. The goals include visions of a day when lead and mercury are illegal and all computers are recycled. For example, Dell would charge an advance recovery fee and the costumer would return the computer to Dell for recycling. But realistically, what are the prospects? The good news is that EU countries would at least refuse to buy lead- and mercury-laden electronics; U.S. companies, wanting to produce electronics that sell worldwide, would set up policies and goals to meet the EU standards and start to phase out the hazardous materials. Veteran employees at Intel tell me "this is for real." CEOs are telling their employees to "get the lead out" by 2010.

There will be some real progress, no doubt. But beware of corporate "policies" and "goals." We have anticipated the great progress from Wal-Mart and Starbucks because their stated policies sound so good. And beware of "grace periods" which the Europeans will have to grant. And who will monitor the day-to-day realities of production and recycling? The EU cannot hope to monitor such a vast and fast-growing business.

Caution is also required in assessing the idea that most of our computers and cell phones will get recycled. The potentially dangerous materials are tightly encased in the innards of these devices. There are numerous different types of metals and other toxic materials (at least 20), unlike homogeneous recyclables such as soda cans or newspapers. Recycling of electronics is labor intensive and poses a special problem in the U.S. where cheap labor is hard to come by. The big electronics corporations are not likely to establish their own recycling departments. WEEE and RoHS allow manufacturers to designate a "third party" recycler, but on this score the American experience is shady at best. The UNICOR program has federal prison inmates removing parts from computers for a pittance without adequate training or protection (gloves, goggles, masks). The same scenario holds in India and China, where computers exported from the U.S. are often dismantled by under-aged workers with no protection whatsoever. Who will monitor the safety of these workers and the environment at such sites? Clearly nonprofit groups and environmental journalists have their hands full reporting on such matters, though the export of high-tech waste is starting to get covered (notably in books such as Elizabeth Grossman’s High Tech Trash). We will have to hang out the corporate dirty laundry for all to see.

" Myth Number Three. The way to solve issues regarding the environmental and health impacts of electronic technology is through a comprehensive federal plan. Myth number three is inviting because it is a worthy ideal and it is very logical. The U.S. currently has a patchwork of wildly different policies and practices. Collection of electronics vary from curbside pickups in some parts of Massachusetts to obscure fly-by-night recyclers who rent rundown buildings on the other side of the tracks. A uniform, comprehensive federal plan is what we need, but in the "land of the free" the Bush administration has not made environmental issues a top priority. Today, the federal government is the last body to take responsibility for environmental concerns and grassroots actions a la Erin Brockovich are often the most effective approach. The mayors of U.S. cities have also joined together and made real commitments to curb global warming, despite federal apathy. And states like California are miles ahead of the federal government. "The California legislature has passed, and Governor Arnold Schwarzenegger has signed, ground-breaking legislation that will impose the nation’s toughest controls on global warming pollution," says the Natural Resources Defense Council. Concerning electronics, the California Senate has passed electronic waste bills (Bill 20 and Bill 50) that in

some ways mirror the new EU regulations. We must think globally and act on all levels, and definitely not counting on the feds.

The high-tech companies goes by the motto "Speed Saves," rather than the old adage "Speed Kills." But before beating the competition to the market place with a new and faster technofix, they need to heed our words of caution. The new EU standards will help, but they are not a panacea. We will have to keep a close watch, acting on all levels—from the grassroots to the federal and international levels. Ironically, it is through the electronic tools of the Information Age that we can coordinate our efforts.